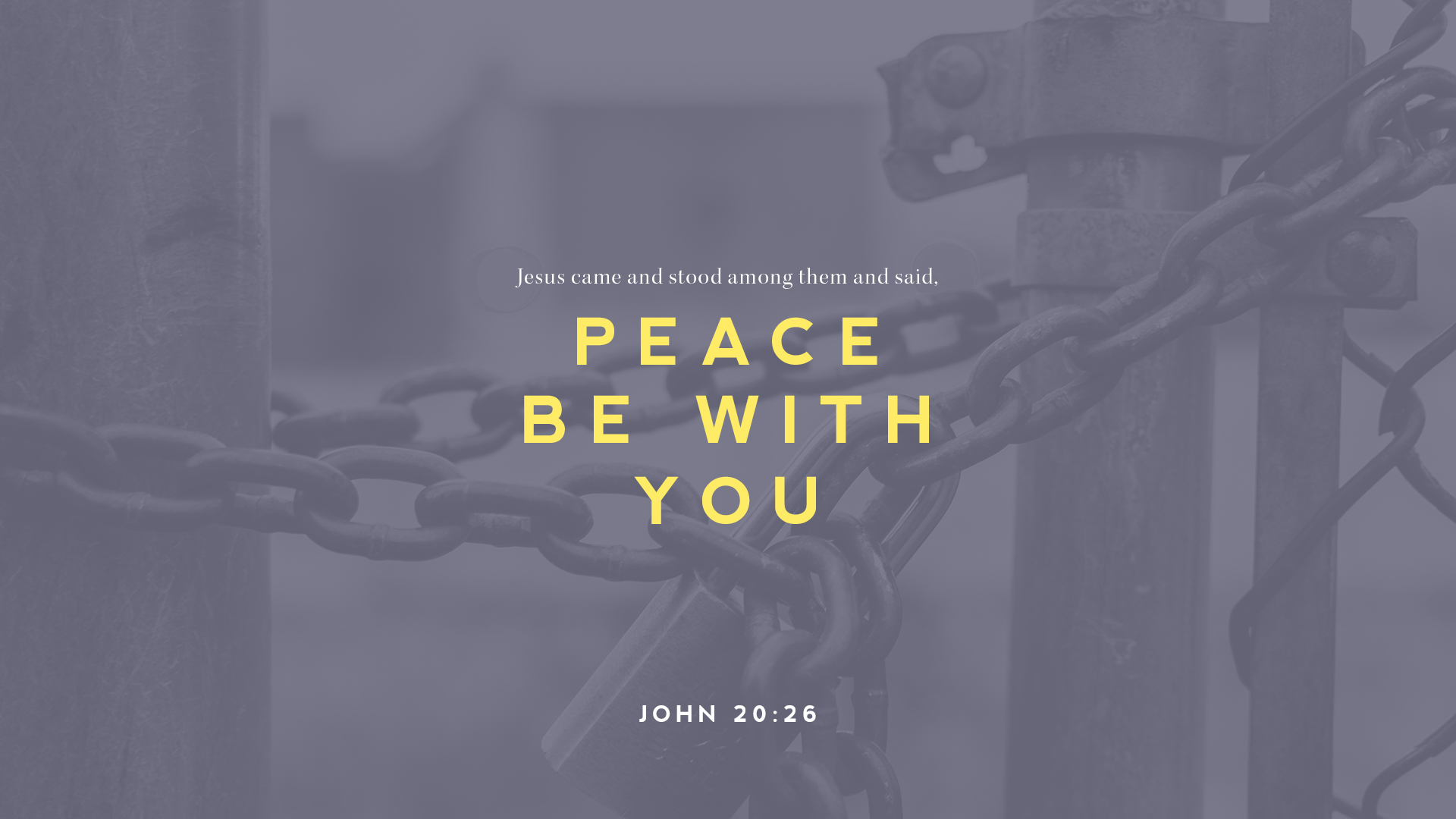 On the evening of that first day of the week, when the disciples were together, with the doors locked for fear of the Jewish leaders, Jesus came and stood among them and said, “Peace be with you!” After he said this, he showed them his hands and side. The disciples were overjoyed when they saw the Lord.

Again Jesus said, “Peace be with you! As the Father has sent me, I am sending you.” And with that he breathed on them and said, “Receive the Holy Spirit.  If you forgive anyone’s sins, their sins are forgiven; if you do not forgive them, they are not forgiven.”

Now Thomas (also known as Didymus), one of the Twelve, was not with the disciples when Jesus came.  So the other disciples told him, “We have seen the Lord!”

But he said to them, “Unless I see the nail marks in his hands and put my finger where the nails were, and put my hand into his side, I will not believe.”

A week later his disciples were in the house again, and Thomas was with them. Though the doors were locked, Jesus came and stood among them and said, “Peace be with you!” Then he said to Thomas, “Put your finger here; see my hands. Reach out your hand and put it into my side. Stop doubting and believe.”

Thomas said to him, “My Lord and my God!”

Jesus performed many other signs in the presence of his disciples, which are not recorded in this book. But these are written that you may believe that Jesus is the Messiah, the Son of God, and that by believing you may have life in his name.

When I read the news about Rohingya refugees dying when their boat gets capsized as they try to make it back to their home land, cities being quarantined with fear of a virus, and people being killed because of butterflies, I feel doubt rise. I want to ask where Jesus is in all of this, and how we can find peace when there is so much to worry about. Can we stop doubting and believe?

Having faith can be hard. It feels easier to lock yourself in a room out of fear, or simply say “I’ll believe it when I see it,” rather than lean on the hope of Jesus.

The disciples were gathered together in a locked room because they were full of fear, despite knowing that the tomb was empty (John 20:1-9) and knowing that Mary had seen Jesus (John 20:18). It wasn’t until Jesus appeared in their room and said, “peace be with you” that they were overwhelmed with joy. I find comfort in seeing that Jesus met the disciples where they were, despite their fear or their doubts. He entered their locked room to remind them who He was, and what He was capable of.

It’s hard for me to imagine all the emotions they would have experienced in that moment; peace, joy, relief…I think of times when I’ve been fearful or worried. Although Jesus has never physically appeared in front of me and said, “peace be with you,” I’ve definitely found His peace through feeling His presence.

The fact that the disciples were hiding from the religious leaders of the day, even though they knew Jesus had risen, makes me think that they were skeptical of His power. Then, when they told Thomas about the experience, Thomas responded with skepticism as well, he essentially said, “I’ll see it when I believe it.” How often do we react this way? Can we really stop doubting and believe?

Some people prefer to avoid the news as it’s too worrisome, and some people listen to it and become skeptical of any hope. I’m trying to be intentional with remembering that Jesus is with us every step of the way, and that we have hope in who He is. Instead of turning it off when things become heavy, try praying for the events, being informed, and leaning in to hope.

When you are fearful and alone, remember that Jesus is always with you. He meets us where we are: the locked room for the disciples, the other side of a news article. Sometimes we’re like Thomas and “we need to see it to believe it.” Though it is unlikely that Jesus will physically arrive in your room, we need to remember that Jesus walks with us daily. When we sense Jesus’ presence, we need to lean into it, stop doubting, and trust and believe that He is there, and find peace.

Christ had died, Christ has risen, and Christ will rise again.

Peace be with you.

Lord, we thank You that You are with us every step of the way. We want to lean into you and stop doubting. Amen.

Kristen is the Copywriter/ Copy Editor at the National Ministry Centre for the Christian and Missionary Alliance in Canada. She has a passion for words and creativity. Kristen and her husband, Chris, enjoy board games and taking care of their house plants.
Learn more